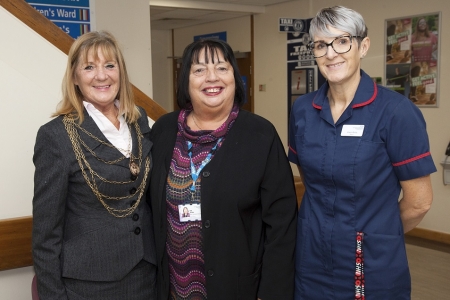 Doncaster and Bassetlaw Teaching Hospitals (DBTH) were recently visited by Councillor Linda Curran, Civic Mayor, who stopped by various hospital services to meet with staff and witness the excellent care that is being provided at the Trust.

Selected by her council peers in May 2019, Linda undertakes ceremonial duties on behalf of the borough: attending functions, opening new developments and backing local charities. Since her appointment she has shown a keen interest in the healthcare sector, having supported fundraising efforts for the Firefly cancer organisation. As such, Linda was very enthusiastic about her guest appearance at both Doncaster Royal Infirmary (DRI) and Montagu Hospital, where she received a festive tour of some of the facilities.

At Doncaster Royal Infirmary, Linda was given a behind-the-scenes look at the women’s and children’s block, which was adorned with Christmas trees, bright ornaments and a general assortment of wintery decorations. The visit began on the neonatal department - which specialises in treating babies, as well as those who were born prematurely - with the civic mayor speaking to the team about the pressures of the job, what they do, and how things have been for the past year. Not only that, but she also took the time to catch up with some of the new parents, asking them about their experiences so far.

After that, the next stop was the Children’s ward, where Linda had the chance to look over the seasonal celebrations that have been organised for the patients staying there over the December period.

Speaking about this, the Civic Mayor said: ‘’So much important work takes place within these hospital walls and it was an honour to meet everyone. It was particularly heart-warming to see how the team pulled together to ensure that all of the children have a chance to enjoy themselves and still experience the Christmas spirit.’’

Linda was escorted throughout by Pat Drake, Non-Executive Director at the Trust and former nurse, who said: ‘’we are really appreciative of Linda taking an interest in our services. As a healthcare provider we treat a population of over 444,000 people, and our women and children’s service is especially busy. With that in mind, it’s great to see that our local representatives want to find out more about what we do.’’

Once the tour of DRI had concluded, Linda then made her way over to Montagu for the rest of the afternoon. Greeted by another member of the Trust’s Board of Directors, Sheena McDonnell, she was shown around the hospital’s newly-refurbished rehab service, before getting to observe scenario training in the clinical simulation centre. Here, staff can practice medical procedures and participate in crisis drills on an extremely realistic, full-body mannequin. Standing in for a patient, this technically advanced model can be programmed to represent various types of patients- be they young, old, fit or frail – and behaves in a very lifelike manner.

Linda continued: ‘’Getting to watch this sophisticated training exercise was a privilege and it was truly fascinating to watch our local healthcare specialists in action. I was made to feel so welcome by the Trust and thoroughly enjoyed the whole experience. I am eagerly looking forward to returning at a later date.’’

This visit tied into DBTH’s ongoing festive celebrations, alongside an annual pantomime live-stream for patients and Christmas lights ceremonies.