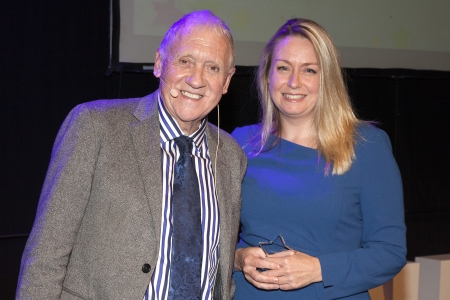 A Chief Cardiac Physiologist has been publicly recognised for their above-and-beyond support and development of trainees doctors at Doncaster and Bassetlaw Teaching Hospitals’ (DBTH) annual Star Awards ceremony.

Alexandra Smith, Chief Cardiac Physiologist, was awarded the ‘Teaching Hospital Award’ for her tireless work ethic in supporting students and junior cardio-respiratory staff in her role as a training lead within her department. Alexandra has also been instrumental in introducing a variety of new training packages, mentored apprentices, and assisted others in getting to grips with new tests and examinations.

This accolade is intended to shine a spotlight on those who have gone the extra-mile in their day-to-day roles.  Specifically, the honour also acknowledges where members of Team DBTH have made a significant contribution to research, increased the quality of available training opportunities, or just generally helped to develop their colleagues so they can deliver better patient care.

Speaking after the awards ceremony, Alexandra said: ‘’I am so touched to have received this award, but it doesn’t really belong to me. Ultimately it’s the students who put in all the hard work in and are at the centre of all we do. It has been a very dynamic and fulfilling few years in terms of development and education for healthcare science and having our work recognised in this way is truly an honour. Thank you’’

Alexandra’s passion for nurturing the development of colleagues has also been noted by those around her who appreciate her commitment, drive and approachability. In fact, Alexandra regularly volunteers to support her colleagues. As a result, the reputation of DBTH’s cardio-respiratory department is noted as being a desirable placement for Healthcare science undergraduates and postgraduates, where it has been reported that budding students are now specifically requesting to be placed at the Trust, due to this encouraging word of mouth.

The program, which is the first of its kind in the country, is already proving to be incredibly popular and the inaugural cohort will be graduating in July 2020.

Suzy Brain England OBE, Trust Chair, said: ‘’As a Trust, we are all extremely proud of Alex, who has managed to accomplish so much whilst also staying on top of her usual clinical duties. Thanks to her, we are being positively talked about across the region and are celebrated as a forward-thinking and dedicated training hub for cardio-respiratory. She couldn’t be more deserving of this award.”

The DBTH Star Awards were held on Thursday 19 September at the Doncaster Dome and were presented by BBC Look North’s Harry Gration, MBE. With 11 awards handed out over the course of the evening – such as Unsung Hero of the Year, Leader of the Year and Volunteer of the Year – it was certainly a memorable night for all.