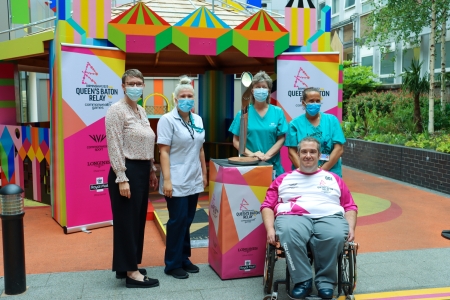 Sheffield Children’s Hospital today (12 July) took its place in the international journey of the Queen’s Baton Relay, which was welcomed with the cheers and applause of patients, families and colleagues.

The Queen’s Baton was carried into the hospital by Batonbearer Fraser Lamb, a former hospital patient and outstanding fundraiser for The Children’s Hospital Charity in support of Sheffield Children’s.

The baton is visiting 72 nations and territories around the world. Sheffield Children’s was proud to have a place on the route and delighted that the baton could also be carried by a former patient.

Fraser was nominated for the Batonbearer role, in recognition of his contributions to their local community. Inspired by the lifesaving care he received as a child for spina bifida and hydrocephalus, Fraser Lamb pledged to conquer 2,021 miles in 2021 in his wheelchair for Sheffield Children’s.

Fraser said: “Firstly it was a huge honour to be nominated as a Batonbearer and an even bigger honour to be selected. It was very surprising but I’m really pleased and happy.”

Fraser first set out to raise £1 a mile, but he has now raised more than £25,715 with donations from across the country and around the world too.

Fraser said: “I'm here today because of them. The hospital will always have a special place in my heart."

Ruth Brown, Chief Executive at Sheffield Children’s, said: “I’m immensely proud that the Queen’s Baton Relay has come to Sheffield Children’s! It’s such a privilege and an honour for us to host it. To have Fraser with the Baton as a past patient and someone who has done fantastic fundraising for us – it’s an emotional moment.

“It’s a really exciting time at Sheffield Children’s as we’re working with partners across the city to innovate and expand excellent health care for children and young people. The Baton travelled to the Olympic Legacy Park after visiting us at the hospital – which is where we’re going to build the UK’s first National Centre of Child Health Technology! So it was really special to see how our care here is being connected to the work we’ll be doing to shape the future of healthcare over there.  We’re an international trust providing care to people from all around the world, and the Baton is a powerful symbol of those connections.

“It has also been brilliant to see how having the Baton here at the hospital has stirred interest amongst the young people about the Commonwealth Games too.  We’re part of Active Hospitals at Sheffield Children’s which integrates exercise and physical activity into our holistic approach to care – so this event is perfect!”

Patients Chloe, Grace, Oliver, Max and Isabella and their families were part of the group to welcome the baton into the hospital. Families said it was a welcome surprise while staying at the hospital and loved getting their picture taken with the Baton and meeting Fraser.

The Queen’s Baton Relay is in celebration of the Birmingham 2022 Commonwealth Games. During its time in Sheffield, the Queen’s Baton Relay visited Sheffield Children's Hospital, Sheffield Olympic Legacy Park (SOLP) and will join local schools and community groups to experience a range of sporting activities during a sports festival at the English Institute of Sport Sheffield (EISS).

The Relay began on 7 October 2021, with Her Majesty The Queen placing her Message to the Commonwealth into the Baton. The Baton is now on its 294-day long journey to every corner of the Commonwealth – finishing in Birmingham for the Commonwealth Games on 28 July until 8 August 2022.