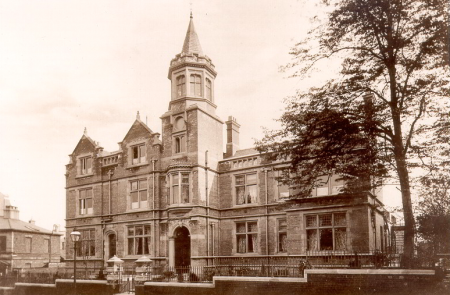 Sheffield Children’s is 144 years old this Sunday, so it’s time for a little journey through history.

On November 15 1876 Sheffield Children’s Hospital opened for the first time on Brook Hill, not far from where the Western Bank site now sits. With a rent of £63 a year, it was an ‘infirmary for children’ founded by architect Mr J.D. Webster, doctor Mr William J. Cleaver and solicitor Mr Henry Vickers. Together, they formed a committee and decided it would be “expedient to fund an institution for the relief of poor sick children.”

In its first year, the Hospital saw 29 inpatient admissions – some way short of the 24,577 inpatients seen at the Trust in 2019/20. But that’s not the only thing to change over the years. By 1907 we had installed our first X-Ray machine – and some electric lighting – before things really warmed up in the 1920’s with electric radiators replacing open fires and the operating theatre opened its doors.

Thankfully 1907 that wasn’t the last time we welcomed a new scanner. As well as keeping pace with the advancements of modern medicine with various new scanners, in 2018/19 two new world class scanners – including the SPECT CT Scanner funded by supporter donations – arrived at Sheffield Children’s.

Since 1948 our services have been provided under the NHS and our trust continued to grow. In the 1970s we extended what became the Emergency Department and last year 58,721 patients were treated there. But we’re still looking to improve the experience for those patients and The Children’s Hospital Charity is helping us to make this happen. Take a look at their website to see how: https://www.tchc.org.uk/appeal/emergency-department/

The Children’s Hospital Charity, was formed exactly a century after the hospital in 1976, to help the Trust go above and beyond NHS provision with new facilities, research, medical equipment and an engaging environment for all who visit.

We’ve also continued to see more children in our other services, and now see more than 212,000 people a year in Outpatients, and 24,500 children stay at least one night in our wards. Many of these children are seen in our fantastic new wing – supported by charitable donations and opened by HRH Duke of Sussex last year.

It’s not just hospital care. In 2019/20 we saw more than 20,000 children for community mental health appointments, 50,000 children at our Ryegate Centre and 154,000 community appointments, carried out almost 2,000 transfers through Embrace, whilst also supporting families through our respite centre Ryegate House and our four inpatient lodges at Becton – which even has its own school!

We’re also driving forward international understanding of children’s health and treatment options through a highly active research centre, and the training and development of professionals in the UK and abroad. The Sheffield Children's Clinical Research Facility (CCRF) opened in 2008 as the first dedicated CCRF in the UK and last year 302 research studies took place with the Trust’s involvement. We have a vision to keep leading the way, including further development of research and plans for a Centre for Child Health Technology – the first of its kind in the world.

Today, Sheffield Children’s is one of only three dedicated children’s hospital trusts in the UK and provides integrated healthcare for children and young people, including community and mental health care as well as acute and specialist services. Our services are proudly provided by excellent people who are guided by Compassion, Accountability, Respect and Excellence.

We provide a full range of services for residents of Sheffield and South Yorkshire as well as specialised services for patients from across the United Kingdom – and occasionally beyond! From the start of Sheffield Children’s we have depended on the generosity of the community to develop our services and be the very best it can be.

We are grateful to everyone who has supported us, from sharing their story and inspiring others to those who have held a coffee morning, baked cakes, got active, sponsored a snowflake and come together as a community, business, school or family for Sheffield Children’s. Every story shared, each kind word and every donation means a huge amount.

As well as support from The Children’s Hospital Charity, Sheffield Children’s has  a number of fundraisers including the Parents' Association of Children with Tumours and Leukaemia (PACT) Charity. In 2018 their work saw the launch of the PACT and Westfield Health Oncology and Haematology Centre, which is used daily by patients locally, regionally and nationally.

In 2014, The Children’s Hospital Charity also established a dedicated group of ‘Children’s Champions’, a group of philanthropists comprising individuals, companies and private family trusts, to follow in the founder’s footsteps by fundraising for equipment above the standard NHS provision.

In their first five years, they have raised more than £427,000 for The Children’s Hospital Charity, helping to fund equipment including:

-         Manometry Stacker, which assists clinicians with endoscopies and probes the functionality of the muscles in the gut.

The Champions’ most recent provision of equipment was a new arthroscopy stacker, costing £28,000, for the knee service at Sheffield Children’s. The service has grown by over 400% since 2015 and referrals from across the country are growing at an unprecedented rate. Only around 60% of the patients at the knee service are from Sheffield, with the rest attending from a wide geographical area across the country.

Thank you to our wonderful colleagues, volunteers and donors who have helped patients over the years and to everyone who supports us.