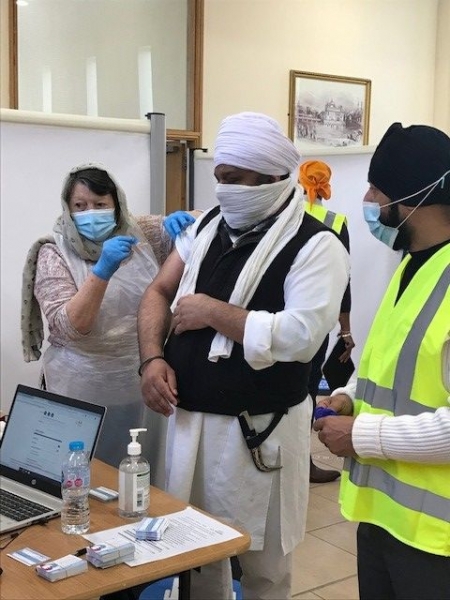 Over 800 residents took advantage of pop-up vaccination centres set up at Doncaster’s Belle Vue Mosque and the Gurdwara at Hyde Park over the weekend.

As part of the continuing drive to get as many people as possible vaccinated across the borough, the Mosque and Gurdwara (Sikh Temple) together welcomed a large number of Doncaster’s most vulnerable and priority population, where first doses of the Covid-19 vaccine were given.

Cllr Majid Khan helped organise the event at the Mosque and promoted it among the Muslim community and surrounding neighbourhoods, urging people to make appointments. He said: “The vaccination day was very successful. The decisions we make as elected representatives are always based on the safety and welfare of the residents of Doncaster, and it’s for that reason we worked so hard with the NHS, the Doncaster Council public health team, the Jamia Sultania at the Mosque and Guru Kaldigar at the Gurdwara to set this up.

“We need to ensure that the vaccination programme is as far reaching as possible ensuring the wellbeing of our elderly and vulnerable residents.

“Another lockdown would be damaging to the physical and mental health of residents, would be detrimental to our children’s education and would deepen the financial damage suffered by so many of our hard working residents and businesses. The only way to ensure that this doesn’t happen is to get vaccinated and protect each other.”

General Secretary at the Gurdwara, Surat Landa, said: “People have been gaining confidence in having the vaccination and we are so pleased to see so many people coming here today from all communities, not just the people who use the temple. It is so important for people to protect themselves and others by having the jab.”

Chief Nurse for Doncaster CCG Andrew Russell said: “The pop-up centres have been a great success with 274 answering the call at the Mosque on Friday and a further 550 visiting the Gurdwara on Sunday. The numbers have far exceeded what we imagined. We hope to hold more pop-up centres like this in different settings over the coming weeks and months.

“It is crucial for us to engage with all our diverse communities in Doncaster to encourage people of all ages to have the vaccine when it is offered to them and to reassure them of its benefits and its safety.”