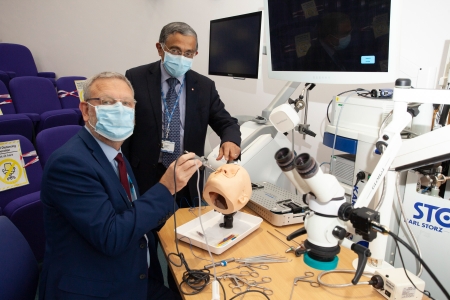 Delegates from all over the UK visited the hospital and were provided with vital free training from Doncaster and Bassetlaw Teaching Hospitals (DBTH).

The event was organised by ENT Masterclass, a multimedia training platform in Otolaryngology (a surgical subspecialty that treats conditions related to the head and neck), and saw 11 delegates and seven faculty members come to together to take part in this debut session. As a group, they were provided with 12 heads for practicing nose operations and 12 for ear operations, all of which were based on real patients and manufactured by a company in Germany.

Those who attended were put in a real theatre condition and were provided with all the instruments that they need to operate on the 3D printed heads, such as drills and microscopes.

Mr Muhammed Shahed Quraishi OBE, a Consultant Ear, Nose and Throat (ENT) Surgeon at DBTH and Director of ENT Masterclass, said: “This was an incredibly useful tool for training surgeons, especially in the current climate of COVID-19 where the surgical opportunities are not as readily available.

“This was a fantastic opportunity for all involved and obviously DBTH have always been supporting of such national training initiatives.”

Like many, ENT Masterclass has had to adjust how they conduct their meetings, and this event was one of the first to be held in-person since the pandemic, however, they have been conducting a variety of successful virtual events since the pandemic began.

The organisation created the Global Townhall which had its first international meeting in March this year, and saw faculty from Sydney to Texas partake in a worldwide virtual course that featured 22 state of the art lectures, as well as four panel discussions. The second ENT Masterclass Global Townhall was held in mid-January 2022 and was entitled ‘The International Ward Round’. This consisted of three two -hour-panel discussions, and was streamed via multiple platforms including Facebook and YouTube.

ENT Masterclass also possess the world’s largest cyber textbook on operative surgery which contains 540 surgical videos conducted by surgeons from all over the world. This free educational resource is incredibly popular, particularly during the coronavirus period, as it has allowed people to continue their education despite the limitations brought about due to various lockdowns.