Partners' news: Bears of Sheffield raise over £750,000 to complete appeal for new Cancer and Leukaemia ward at Sheffield Children’s 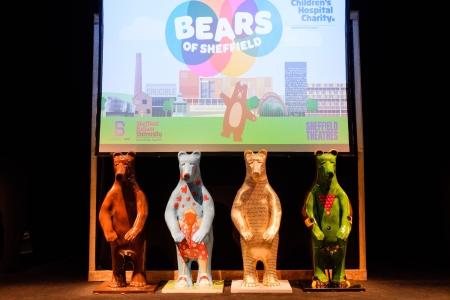 Despite leaving the streets for their forever homes last week, the Bears of Sheffield have left a permanent pawprint for young patients and their families at Sheffield Children’s Hospital.

Bringing together families and friends, businesses, schools and artists, 161 of the distinctive animals were on display in public places across Sheffield this summer.

Fundraising throughout the trail as well as events and the grand auction have seen more than £750,000 raised, with the total expected to rise further. The project has completed The Children’s Hospital Charity’s three-year appeal to transform the Cancer and Leukaemia ward at Sheffield Children’s Hospital.

Project Manager Cheryl Davidson said: “The Bears of Sheffield brightened the city’s streets and spaces throughout the summer, bringing some much-needed positivity.

“We would like to say a huge thank you to everyone who made this trail possible, to all the artists who took part and the generosity of all the sponsors. Thank you to Sheffield BID and Sheffield Hallam University for backing the project from the beginning as well as Meadowhall for their role as a presenting partner for the Farewell event and Henry Boot Construction for their dedication to the project logistics as supporting partner.”

“The Bears showed once again what we can achieve together when we are united behind a great cause and we’re delighted it completed the fundraising to provide patients, families and staff with the facilities they deserve when they need it most.”

As well as the fundraising for Sheffield Children’s, the charity sculpture trail has also helped reinvigorate Sheffield’s local economy and reconnect the community following COVID-19.

Diane Jarvis, Head of Business Operations at Sheffield BID said: “The Bears of Sheffield was a fantastic success not only because of the phenomenal funds raised for Sheffield Children’s Hospital, but also for its positive impact on our city centre.

“It animated the city, boosting vibrancy and spending for local businesses by bringing thousands of visitors into Sheffield city centre, grabbing the attention of the local community and the public from Yorkshire and beyond. It brought together public and private organisations to deliver a truly collaborative and memorable event, and Sheffield BID was delighted to be one of the headline sponsors.”

Darren Pearce, centre director at Meadowhall, comments: “As a long-standing partner of The Children’s Hospital Charity we were proud to host this year's Farewell Event. The atmosphere during the event was incredible and it's been great to see so many people across our community come together to raise so much money for this important cause."

Richard Calvert, Deputy Vice-Chancellor at Sheffield Hallam University added: “Sheffield Hallam is proud to support The Children’s Hospital Charity’s Bears of Sheffield sculpture trail. As a University at the heart of the city, it’s a privilege to have been a main sponsor of this great city-wide project, bringing local communities, businesses and artists together to raise vital funds for Sheffield Children’s Hospital.

“It has been a very challenging year for all of us, and the Bears of Sheffield have provided a great opportunity for people to get out and about, and to reconnect with their city.”

The Cancer and Leukaemia ward at Sheffield Children’s sees patients from across the UK for chemotherapy, operations and bone marrow transplants.

The team on the ward provide some of the best childhood cancer care in the world, with the hospital’s five year-survival rate matching the best figures reported by countries internationally, including Australia and Canada.

As well as  larger, brighter space, there will be a bigger and better playroom in the heart of the ward. It will maximise the view of Weston Park, making patients feel connected to the outside whilst they are getting better.

There will also be improved spaces for parents to stay with their children, with the new ward increasing the number of beds and specially filtered isolation rooms. It will also create a purpose-built break-out room for teenagers and young adults for the first time.

The new patient bedrooms will have more en-suite facilities and a bespoke wall which can be personalised and made to feel like home. There will also be reading lights for patients and parents, ensuring they can read, write or take a break, as well as temperature controls.

Dr Dan Yeomanson, Consultant Paediatric Oncologist at Sheffield Children’s Hospital added: “It was a privilege to be able to be at the final auction of the Bears of Sheffield and to experience the massive generosity of everyone in the room. I’d like to thank all the artists whose skill and imagination made the Bears so desirable in the first place.

“Completing the fundraising for the new Cancer and Leukaemia ward is so exciting- I’ve just been round the site and it is really taking shape. Patients will be moving in within the next few weeks and it will make a massive difference to them. To everyone who has helped raise the money, thank you!”

To find out how you can support The Children’s Hospital Charity’s appeal to transform Sheffield Children’s, please visit: www.tchc.org.uk/appeal