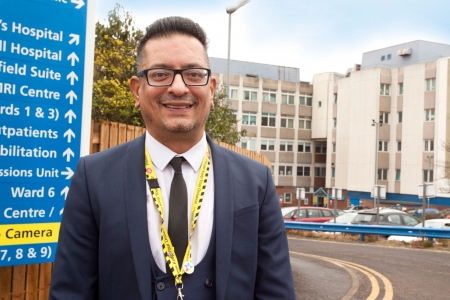 Qurban Hussain, known as Kirby to friends, family and colleagues, has been appointed to the newly established role, joining the People and Organisational Development team within the local hospitals.

The role will lead on developing and implementing the Trust’s Equality Diversity and Inclusion (EDI) strategy, helping to embed it across all of the organisation’s activities, ultimately impacting on the Trust’s culturally diverse workforce of over 6,600 and the communities they serve.

Around 80 per cent of all colleagues identify as female, while around three per cent have declared a disability or long-term condition and around 10 per cent of the workforce defines as LGBTQ+ or have undisclosed their sexuality.

Speaking about his recent appointment, Kirby said: “I am very pleased to join the team at Doncaster and Bassetlaw Teaching Hospitals at this time. The commitment to Equality, Diversity and Inclusion is clear and the organisation has already made significant strides in committing to the race equality code, establishing BAME and LGBTQ+ networks and launching a reciprocal mentoring programme – but there is much more to be achieved.

“Equality, Diversity and Inclusion should be viewed as a golden thread through our organisation, putting an emphasis on the development of a welcoming environment for those from all backgrounds and walks of life, ultimately improving and enhancing the care and treatment we deliver as a Trust and making us an employer of choice for many.”

Kirby brings a wealth of experience accumulated throughout a distinguished 24 year career providing EDI leadership in a variety of public sector organisations.

Director of People and Organisational Development at the Trust, Karen Barnard, welcomed Kirby’s appointment, saying: “I am extremely pleased we have been successful in appointing such an experienced professional as Kirby, who I have no doubt will move forward our equality, diversity and inclusion agenda, as well as meet the goals as set out in the NHS People Plan.

“It has long been an ambition for the organisation to create this post, and the events of the past 12 months have further underlined the need for us to truly support the disparate needs of the communities we serve, reducing inequalities wherever we find them and ensuring everybody has access to high quality hospital services.”